Fuxia Scholz, a prolific WordPress Stack Exchange (WPSE) contributor, is the first member to reach 100,000 reputation points. The popular Q&A community site rewards expert advice by floating the highest quality answers to the top, allowing users to earn reputation points. The gamified help community has proven to be more motivating for developers than many traditional forums, since the upvotes communicate how useful their answers are to others. 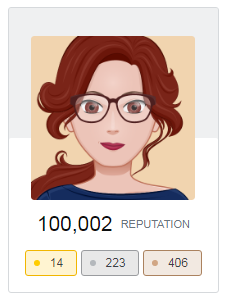 Scholz started on Stack Overflow a few months before WordPress had its own site. She wrote around 50 answers and made connections with other WordPress developers ahead of the site’s beta phase in June 2010. Once the site graduated and got its own logo and design, Scholz started writing more.

“One core idea for all Stack Exchange sites is gamification: You earn reputation, and you get access to certain privileges,” Scholz said.

“You can say I got a bit addicted. My favorite questions were about problems for which I didn’t know the answer, and couldn’t find one with a search engine, because no one else had solved that before. I used my answers to teach myself, and I learned a lot this way! In May 2011 my reputation on WPSE was already higher than on Stack Overflow, and for the next years it went up in a steep curve.” Ten years after WPSE launched, Scholz has become the first to reach 100,000 reputation points.

“What reputation and karma do is send a message that this is a community with norms, it’s not just a place to type words onto the internet. (That would be 4chan.)” Stack Overflow co-creator Joel Spolsky said. “We don’t really exist for the purpose of letting you exercise your freedom of speech. You can get your freedom of speech somewhere else. Our goal is to get the best answers to questions. All the voting makes it clear that we have standards, that some posts are better than others, and that the community itself has some norms about what’s good and bad that they express through the vote.”

The reputation points were originally inspired by Reddit Karma. Spolsky admits that the points not a perfect system but they do tend to “drive a tremendous amount of good behavior.” Gamification can shape and encourage certain behaviors but Spolsky said it’s a weak force that cannot motivate people to do things they are not already interested in doing. For Scholz, it was the community aspect and an earned sense of ownership and responsibility that kept her hooked.

“In 2012, the community elected me as a moderator, and that changed a lot,” she said. “Now it wasn’t just a game anymore, it was a duty. I felt responsible for the site. I still do. I also found some friends on there. We met at WordCamps and in private, and worked together on different projects.”

Scholz no longer works in development and said she doesn’t care about WordPress anymore, but she is still a regular contributor on the WPSE.

“I switched careers and work as a writer, translator, and community manager for Chess24.com now,” she said. “But I still care about the site WordPress Stack Exchange! I keep an eye on new tags, handle flagged posts and comments, try to make every new user feel welcome, and I search for people who are abusing the system — vote fraud and spam. And, very rarely, I even write an answer, because I still know all this stuff.

“Checking the site has become a part of my daily routine, like feeding the cat.”

This daily habit has snowballed into Scholz racking up more than 2,000 answers. She is getting upvotes on many of her old answers nearly every day, which is what pushed her over the 100k milestone.

“There is a lot to say about the way our site developed over the years,” Scholz said. “I’m not happy about some things. The enthusiasm of the early days is gone. We don’t have enough regulars, there is no discussion about the site on WordPress Development Meta Stack Exchange, and our chat, once very active, funny, and friendly, is now almost dead.

“Maybe that’s normal, I don’t know. But it’s still ‘my’ site. Reputation and badges don’t really mean anything for a long time now, but keeping the site working, useful and friendly is more important.”