Not Dead Yet! Just Mostly Dead?

With a global recession looming, layoffs happening in some companies, and gloomy takes in the WordPress space on market share, Gutenberg, etc., maybe it’s time to look at the glass half (or a third) full and ask what really matters? What makes a vital WordPress community? Are we in a marathon or a sprint? What if we had a WordPress community event focused on contribution? Your home can be anywhere, however humble, with distributed work. And here’s some nice otter content from Topher.

Gutenberg 13.4 • Learning FSE sooner rather than later • Gutenberg in Tumblr and Day One • WordCamps and the vitality of the WordPress community • AUS WordPress community only mostly dead? • Get SEO Schema graphs • Web font loading geek out • PHP is 28! • PHP namespaces and autoloaders • You can work anywhere… why not Cleveland? • North Commerce — faster than the rest? • and more…

Get your button elements on

Gutenberg 13.4 adds support for button elements in theme.json, sidebar design updates, and performance improvements. There are 25 enhancements and 30 bug fixes.

Here’s confirmation from Matt Mullenweg that Phase 3 of Gutenberg is scheduled for 2023, as mentioned in his last State of the Word.

This clarification came in the context of expressed concerns that Phase 2 is slowing down. Releases polishing up Phase 2 were planned long ago. They shouldn’t be seen as an indication of current decisions about core development and where it’s focused.

“I know that it is frustrating to have to relearn something that you spent so much time learning, but that is the way that we have chosen to do that rework of WordPress as kind of a phased evolution over time… So I guess my message is to make sure that you don’t just wait until every ten releases to update because then you are going to have a lot that you do to have to learn.”

Matías Ventura wasn’t able to make an appearance at WordCamp Europe as planned, so he created an informative Twitter thread on the items he planned to share at the conference. This includes news that Tumblr and Day One (a journaling app acquired by Automattic) are using Gutenberg to “illustrate the flexibility of the block editor beyond WordPress.”

Tumblr has deployed a first beta version of its Gutenberg integration, which is like an enhanced classic editor. Day One has a Gutenberg interface that is currently being trialed in an internal alpha.

WordCamps are vital to the community

Eric Karkovack asked before WordCamp Europe if the event would rejuvenate the WordPress community after years of barely any in-person events. Judging by what we’ve seen so far, we think the answer is yes! But because of post-COVID concerns and lower attendance numbers compared to years before the pandemic, it’s going to take a while to really get back up to speed.

Timi Wahalahti shares what went into mentoring a large regional WordCamp like WordCamp Europe: “The scale of the event can’t be even compared to normal WordCamp.”

This tweet from Cameron Jones about the Australian WordPress community being “practically dead” struck a chord. (Australia is consistently one of the top five countries that are home to core contributors.) The pandemic has frozen many local communities and has likely affected overall contributions to WordPress itself, which has an impact on priorities and features.

We can reasonably hope WordCamps will return to normal in 2023. Even though WordCamp Europe happened and WordCamp US is on schedule, it will take more time to re-energize local communities. 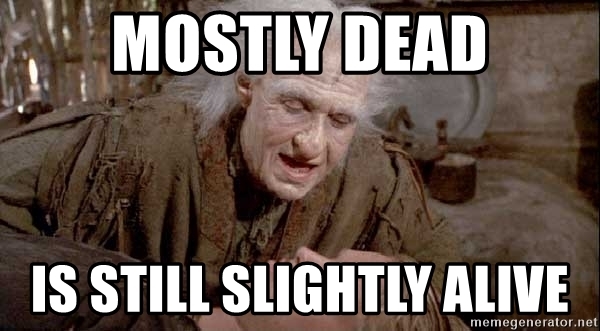 In case you missed it in Post Status Slack, Matt Mullenweg commented on how in-person events benefit WordPress:

“I’m not sure how to quantify it but meetups + WordCamps are a really critical part of the WP story, we got by without them for a few years but really interested to see how we do now that they’re coming back. Especially the contributor side — a lot of how people get involved at the very beginning is almost like an apprenticeship model where someone experienced guides you.

Also I think people are just nicer in person. So the kindness, helpfulness, and thoughtfulness of existing contributors becomes really contagious when you get to not just work together, but break bread and hang out as well.”

WordCamps are important — and even vital — to marketing WordPress and building up its community. Do they impact market share? That would be fascinating to try to measure.

Speaking of market share again, Brin Wilson explains why quoting a number that is supposed to represent WordPress market share alone can be misleading and a bad idea. There are many variables in play, including the size of the market.

Milana Cap asked at WordCamp Europe for support on the documentation team, and she has received a hopeful post-event response. What if we had a WordPress community event focused on contribution? Imagine:

“Contributor Day but it lasts 3 days, no conference, yes afterparty. Besides the usual contribution and onboarding, include project based formats (teams working on the same project collaborate) and some form of Community Summit.”

This is a great idea! Add in some workshops that aren’t just about educating how to contribute — focus on showing attendees how to teach others to contribute, especially at the meetup level. Stress the “why” as much as the “how.”

Joost de Valk explains why site owners should use SEO graphs with Schema metadata and how to go about doing it right. It’s becoming a widely adopted standard, as Joost notes:

Recently, the proposed block protocol standard started talking about integrating with Schema, and WordPress’ core team is also taking an interest; see this discussion on Github.

North Plugins has released a beta for North Commerce, an e-commerce plugin that offers a “micro builder that will be compatible with every WordPress theme and builder.”

North Commerce uses the pre-block method of shortcodes. The screenshots are attractive, and so is the promise of superior speed: “North Queries are 4x faster than WooCommerce.”

It was PHP‘s 28th anniversary on June 8th. On that date in 1995, Rasmus Lerdorf released Personal Home Page Tools 1.0.

Malte Ubl seems to have covered every possible detail you might care to know about web font loading.

David Gibson at StackOverflow took on the topic of decentralization in the American tech workforce. He concludes “we’re witnessing a gradual evening out in the tech industry when it comes to geographic diversity that will potentially create more equity in the talent pool.”

“The increasing prevalence of remote and globally distributed work models makes it more convenient for workers to find optimal living and working arrangements in smaller but similarly thriving and upcoming urban centers.”

Distributed work allows more people to work from anywhere, but this doesn’t send all of us running to the warmest and biggest cities on the coasts. (You don’t say…I’m nearly in the land of the midnight sun.) That means inland and smaller cities can attract and retain some of the remote workforce if they cater to it, as Gibson recommends.

Performance a marathon, not a sprint

Alon Kochba wrote about image format popularity by CMS in last year’s HTTPArchive. He has provided updated numbers from May 22 data.

I wasn’t aware that about 75% of images served by Wix are automatically converted to WebP.

WordPress is working toward improving image format and performance, but it will be a slower ramp up, as Felix Arntz mentioned at WordCamp Europe:

“WordPress performance is a marathon, not a sprint. More important than surpassing commercial CMS is the experience for the users big or small.”

Do you enjoy our weekly notes?

Get them and more in Post Status’ Week in Review. We gather WordPress and WooCommerce news along with significant writing, videos, and podcast episodes from the WordPress community and beyond. Don’t miss the latest updates from the people making WordPress in our This Week at WordPress.org summaries. It’s all in our newsletter!