The Design Process Behind Visme, the SaaS Character in the Cloud

For illustrators, the creation of a character can have different sources of inspiration; a childhood memory, the visual idea of a person they’ve met or simply a creative outburst of imagination. It’s a combination of all of these, plus details carved in memories, that shape new characters.

Illustrators have a certain kind of magic that not only lets them bring to life their memories and perceptions but they also have the capacity of taking a creative brief or idea and bring it to life. This is particularly important when creating a brand mascot.

This is the story of how a creative-minded entrepreneur and a savvy illustrator brought to life a neat mascot character to personify a brand. They joined forces with a 3D sculptor and an animator to bring the character to life in its own animated world.

Putting Our Heads Together To Create Visme, The SaaS Character in The Cloud

The main idea for this project was to create a character that personified the Visme brand. We didn’t want to go the regular route of many other digital brands that use robots or other characters that lack that human touch. Similarly, we wanted to stay away from the cute and fun animal mascot. 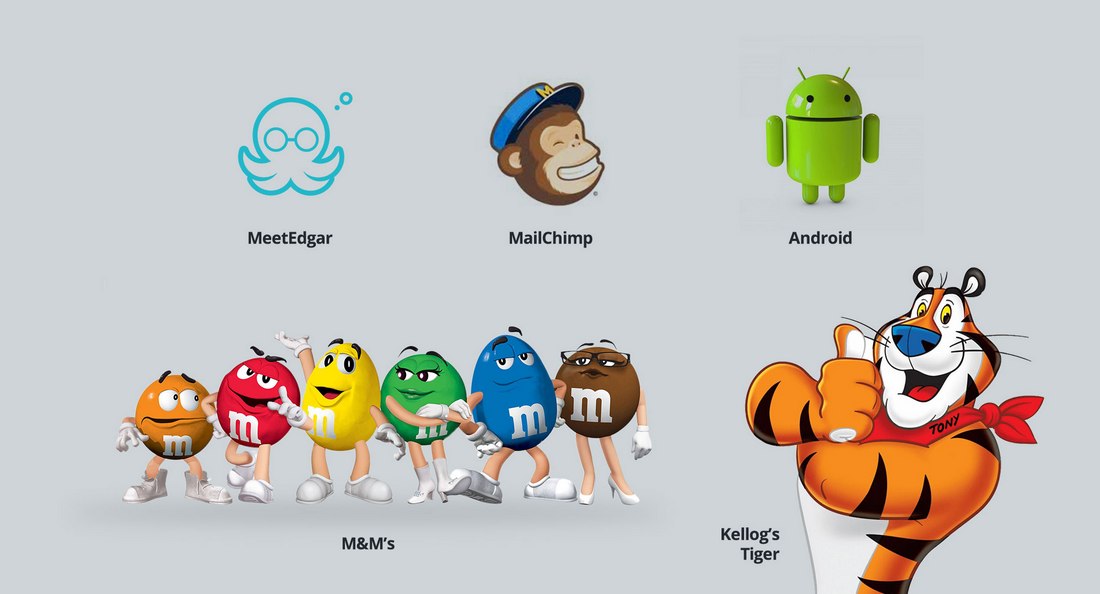 Monfa, our team designer/illustrator and I dug deep into what Visme stood for and how we could visualize that in a personable way. In a general sense, Visme is a digital all-in-one tool for creating visual content easily. The Visme brand is human-centered, so we needed a character that would embody that. Neither a robot or an animal would do.

It turned out that finding that middle ground was more difficult than we thought! So we listed the characteristics we needed to fulfill.

Our character had to:

With this list in hand, Monfa let his imagination run wild.

Tapping Into The Imagination

There’s a strong presence of popular culture into the creation of this character. Monfa brought out all his memories of animated characters that came alive by magic, like Pinocchio and Buzz Lightyear. Thinking of robot style characters, he took inspiration from Mazinger Z and friendly robots like Beymax from Big Hero 6.

The first iterations of the Visme character resembled a friendly giant robot from a Ghibli fairy tale and inspired by science fiction movies from the 80s. Those stories that were full of inventive technologies and retro-futuristic toys that had a life of their own as if through magic.

As the design progressed and Monfa showed me sketches, our conversations helped him evolve the character into one that would personify everything I had in mind from Visme as a brand. One time he said that it was like trying to write a piece of music just by listening to it.

Who/What Is Visme, the SaaS Character in the Clouds

With the ongoing sketches and evolution of the character, we came to the realization that our character, apart from not being robot nor animal, also didn’t have a gender. This made a lot of sense because it had to represent all the different people that Visme aims to support, not just one type of human. On top of that, the character’s visual language had to appeal to both our ongoing users plus the ones that hadn’t heard about us yet. 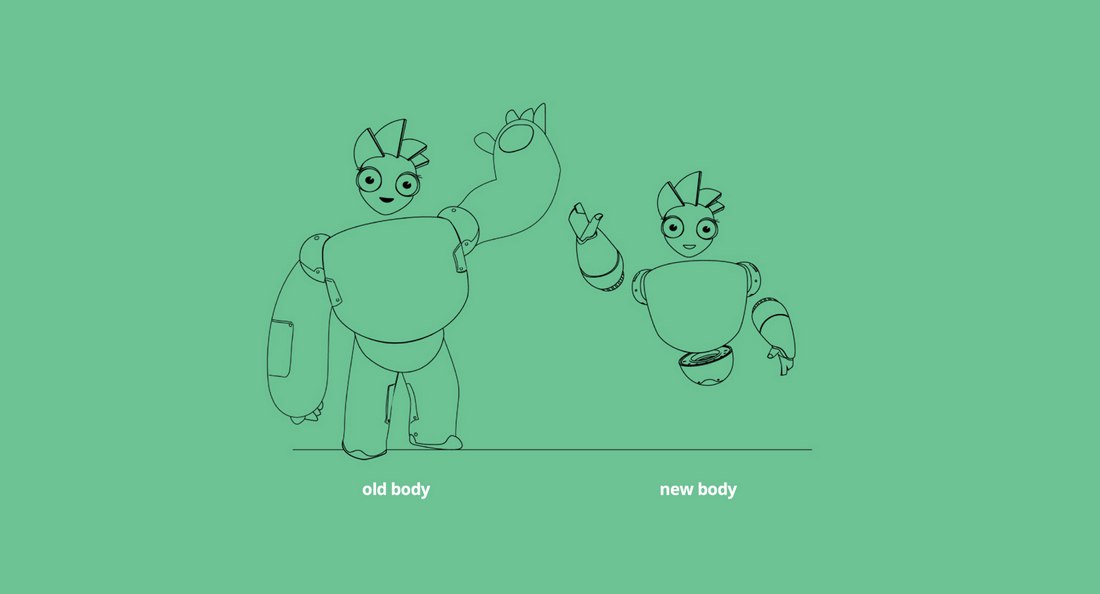 Every day, we interact with digital tools that help us in our tasks, entertainment, and general needs. They are a digital intermediary that connects us with other people. That’s why Visme the character was the digital tool that comes to life. Visme as a character didn’t need to be just a mascot that represented or personified the brand, it needed to be the brand.

How Did the Design Evolve With the Help of Different Designers

The process of designing our mascot involved four people and lots of back and forth communication across continents. I did the art direction from the US, Monfa illustrated in Mexico, Diego 3D sculpted in Costa Rica, and Andrey animated in Saint-Petersburg. We used tools like Sketch, Adobe Illustrator, Adobe After Effects, Blender

The first part of the design process involved myself and Monfa visualizing all the aspects of the list above. Monfa illustrated the first iterations of the mascot as a large friendly giant with a headpiece resembling hair in the same colors as our logo. 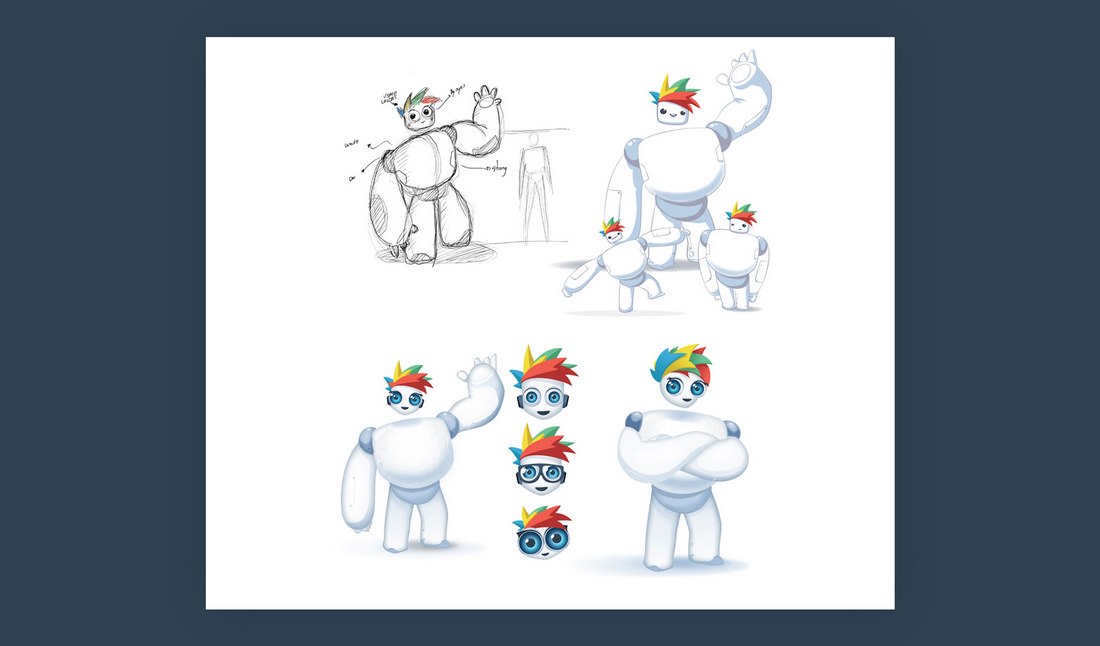 When we were happy with an initial visualization, Diego went ahead and did some fast 3D modeling for Andrey to experiment with short animations. We wanted to see how it would move and interact with space and objects. At this point, the mascot still had legs, and we noticed that these limited the range of movement we needed from our mascot.

In order to make it more agile, Monfa got back to the drawing board and changed the legs to a wheel that could turn into a rocket engine. He also minimized the torso to make it look less gigantic but still powerful.

2. Pose and Action Tests with Animation

We tested body poses and movements that would visualize actions and interactions. The team took great care to animate the facial expressions using Monfa’s visualization of the brand’s logo elements on the mascot’s appearance. The logo’s color pedals as a headpiece on the mascot and the eyes resembling the iris of the logo.

Between Andre, Monfa, and Diego, they did many animation and movement tests to make all parts of the mascot feel like a whole. The most important point for me at this stage was that we stayed true to the brand and the vision at all times.

3. Final Adjustments of The Body

After the team did plenty of action and pose tests, we needed one last adjustment to the body. We were looking for more agility, a better range of movement in any direction. We wanted it to roll, fly, calmly move around, make humorous gestures and other interactions. The body we had was still harnessing that freedom of movement. 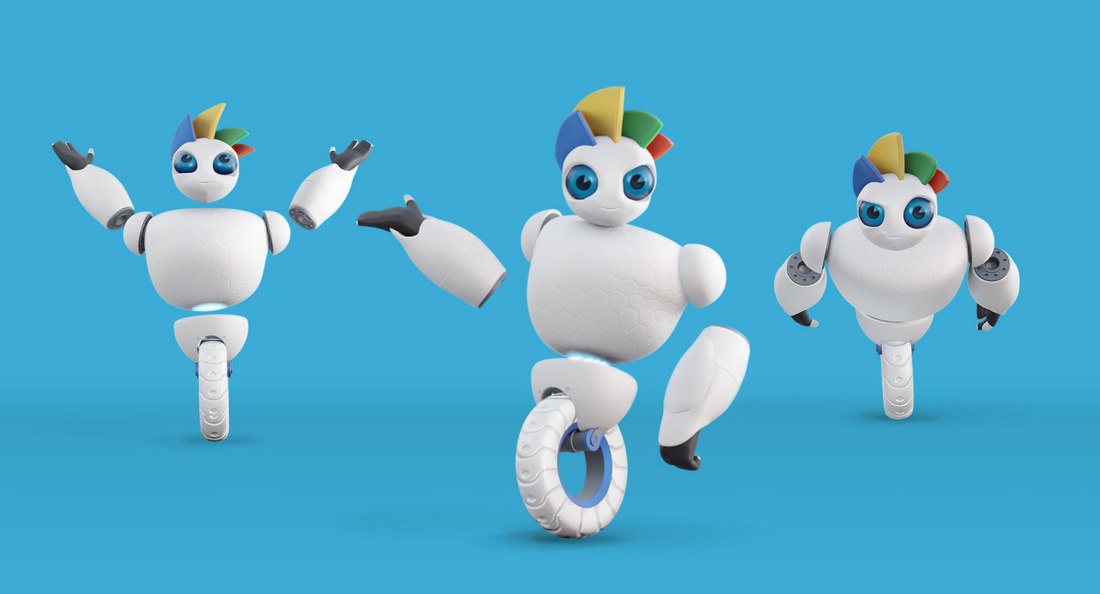 That’s when Monfa released joints from the different body parts and created a magnet system instead. This way, the wheel at the bottom, the arms at the sides and the head were floating in place next to the torso but not connected.

This was the solution to all the movement limitations we were having. We finally had the Visme mascot we all wanted.

What’s in Store for Visme the SaaS Character?

Many of the pose and action tests we did while creating the character involved the creation of an environment and a story for it to interact with. All the while, Monfa was illustrating other characters and elements for the character to move around and engage with. The ultimate goal was to create a video to present both the character and the brand as a seamless idea.

The team worked tirelessly for months to illustrate, sculpt and animate a one and a half minute video. You can watch the final result here. But this isn’t the end of the road for Visme the SaaS in the cloud, we have lots of plans for it.

I’m already writing new scripts for short videos, ads, animated interactions with our website and more. Monfa is creating new environments for the character to engage with. Diego is sculpting other elements and characters for those stories and Andrey is animating the pieces.

Since the environment of our character is a vast white space, all elements we create and animate for it can be repurposed for other videos or shorts. We like to think that we are creating a 3D animation illustration bank to use for our brand.

We hope you enjoyed the design process of Visme, the SaaS character in the cloud. We had so much fun creating it that we couldn’t share not it with you.