WordPress.com officially announced its new pricing yesterday, after rolling it out on April 1. The lack of communication about the changes, and the free plan’s severely pared back storage and traffic limits, alarmed and frustrated many users who for years have considered WordPress.com their go-to platform for simple blogging.

WordPress.com has simplified its offerings from five plans to two plans: Free and Pro. The service has updated its plans from the initial rollout based on overwhelmingly negative feedback about the changes. The initial plans capped traffic at 10K visits on the free plan and 100K on Pro, and limited free users to 500MB of storage. The updated plans drop the traffic limits entirely and revise the Free plan storage limit to 1GB. 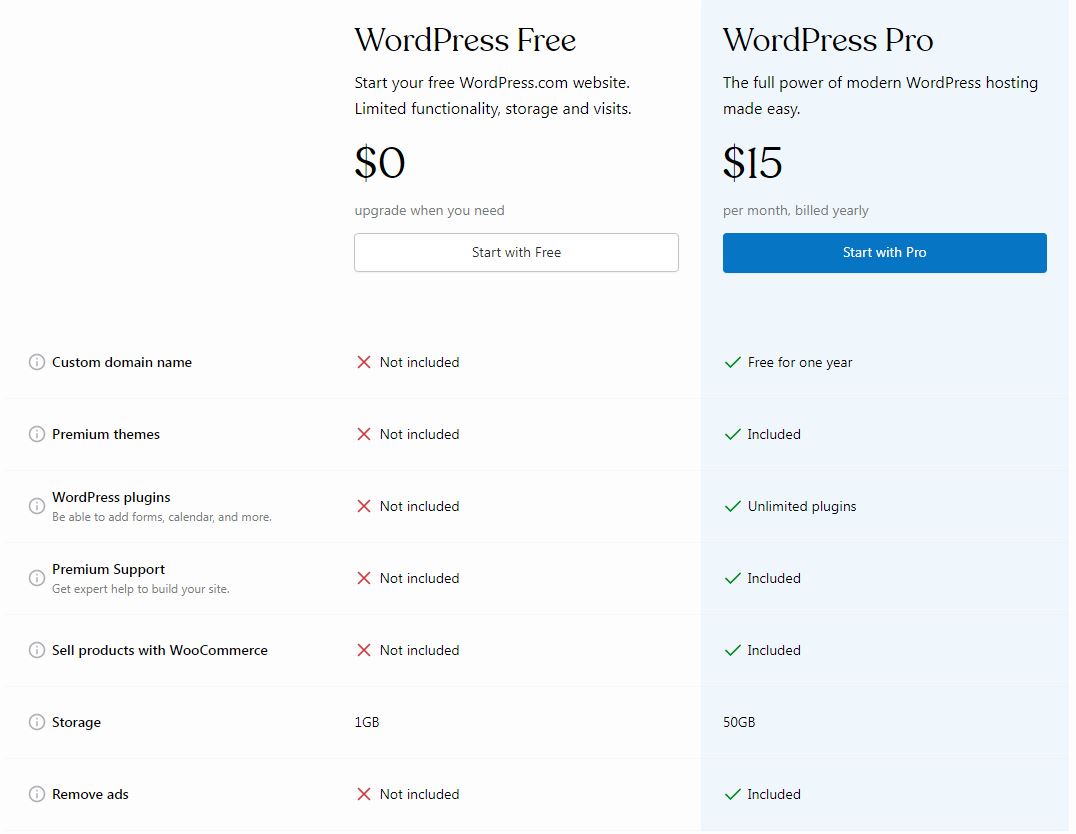 The changes apply to new plans and purchases. Customers on the old plans will not be affected.

In a thread on the service’s support forums, WordPress.com CEO Dave Martin said the old plans were “overcomplicated and confusing.” He offered a few reasons for the simplification of the plans and the major pricing changes:

Monthly billing has also disappeared from the new plans, but Martin said the company is monitoring feedback regarding this change.

Compared to the previous pricing page, it’s clear the new plans are much easier to understand at a glance. However, the major point of contention seems to be how big the jump is between the Free plan and Pro plan, especially for those who simply want to blog with a custom domain. Depending on what region you live in, the previous Personal plan was $4/month and Premium was $8/month for customers who needed a little more to enhance their blogging. 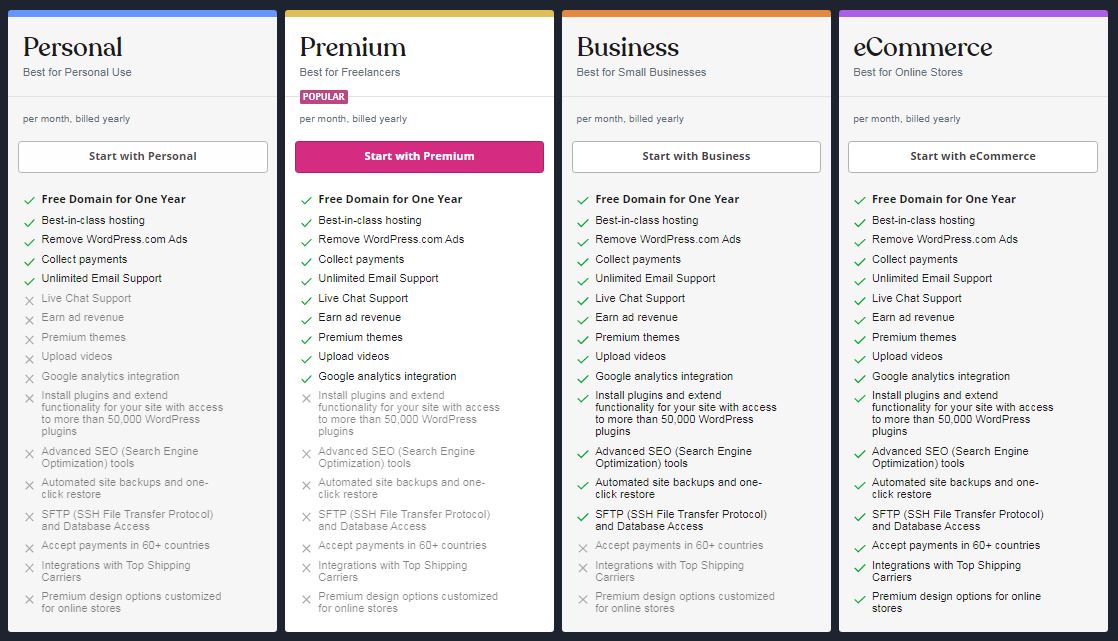 Small personal blogs and free users seem to be the most affected by the pricing update. It’s not clear the magnitude of the impact these changes will have, because WordPress.com still has not revealed the planned options for purchasing additional storage and add-ons. Curiously, these upgrade options were not available in the initial rollout, nor were they included in the official announcement this week.

“Upgrading from $0 to $15 with nothing in between is a big jump and frankly I see more benefit from shifting platforms than from shifting from the greatly reduced $0 plan to this new plan,” WordPress.com user @davekay said.

Another user @griffinsgadgets said “the zero or everything approach just doesn’t work for bloggers and owners of small sites.”

“I’m happy to pay around $8.50 a month, which is what Wix charges for the ability to have a custom domain, no ads and 3GB of storage. I’m now in the process of figuring out how to migrate the site I’ve spent two months building to the Wix platform. I can envisage an exodus of small site owners as a result of this sudden and unannounced pricing change.”

WordPress.com may be moving towards better sustainability by focusing on business customers and site builders, but bloggers feel left behind with these pricing changes.

“$4 for a hobby blog on which I was making no money, up to $15 for a hobby blog on which I will continue to be making no money, is a huge price hike that I just can’t justify,” WordPress.com user @renkotsuban said. “I understand that hobbyists like me no longer make up the core of WordPress users (remember when it was a fork of b2? lol) but wow, not even a heads up before just rolling it out?”

The pricing changes were also rolled out before regional pricing could be applied. For a global company, this will affect users in different, unexpected ways. After their first impressions of the news, the platform may not get a second chance from those who experienced sticker shock during the rocky launch phase.

“It feels like you’ve trapped us in the net with good prices and flexible options, and now you’re taking advantage of our loyalty,” @alinaeo said. “Not everybody needs a pro plan. Also, 150-180$ a year is huge for Romanian users. $15 in Romania means one-week groceries for one person.”

In explanation of the lack of communication with the initial rollout, WordPress.com CEO Dave Martin said, “We often make an announcement several days after a change is made so we have room to work out issues that may arise.” This is a policy the platform’s leadership should consider revising, as it’s clear from copious feedback that WordPress.com users do not like or appreciate that approach. Even if current customers were not affected by the changes, they had to look to the support forums to find out.

“Because of this and the unsettled (ongoing) and unsettling plan/price changes with their poor optics, I’ve already transferred my custom domain away from WordPress to Hover, and I’ve been seriously considering alternative content management systems,” WordPress.com user @jasonmcfadden said.

The staff at WordPress.com have been monitoring a long support forum thread for feedback, which has been overwhelmingly negative. The team is considering their feedback and incorporating it into pricing changes but also losing customers at the same time.

“I believe that it’s in poor practice to make a change without announcing it at all and to then tackle issues that arose afterwards,” WordPress.com user @magiwastaken said. “It feels a bit like an attempt at deception and I’d expect better communication on big changes like this one from WordPress.”

This practice of rolling out major pricing changes to test the waters and then making changes based on feedback is somewhat unorthodox. WordPress.com users who took time to offer their feedback were fairly unified in their expectation of transparency around pricing changes.

“Stealth changes to pricing and plans is not something I can get behind,” WordPress.com user @aywren said. “Something like this should have been announced way in advance – even Netflix tells me months ahead when a price hike is coming. I understand you want to test things before announcing them, but that’s why you write something up that says things are subject to change.

“Please, please, don’t make customers have to search the support forum to try to piece together something as important as pricing changes.“