For the first time in WordPress’ nearly 19-year history, the software’s usage stats are showing signs of declining market share. Its remarkable ascension to 43.3% market share took a turn in March 2022 and usage has slowly declined since then, according to a new WordPress market share report from Joost de Valk that references stats from W3Techs.

In a post titled “WordPress’ Market Share Is Shrinking,” de Valk highlighted the numbers from the last few months, which now conclusively demonstrate a decline: 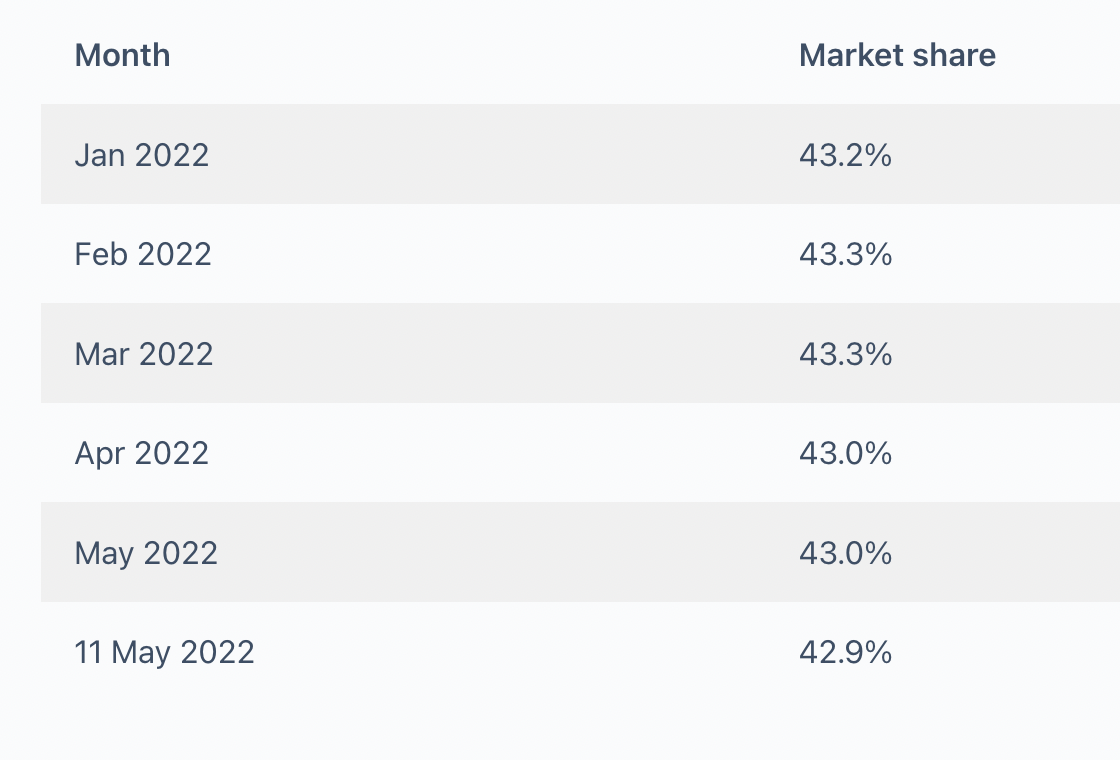 de Valk’s analysis elaborates on how WordPress’ market share, and that of its open source contemporaries, is being eroded by competitors like Wix and Squarespace. He attributes this change to two major factors: WordPress’ lack of focus on performance, and the complexity of the unfinished full-site editing project:

If you look at cwvtech.report you’ll see that in the last year, sites on Wix and Squarespace on average have improved their site speed more than WordPress sites. WordPress has a performance team now, and it has made some progress. But the reality is that it hasn’t really made big strides yet, and in my opinion, really should. Project leadership still seems unwilling to focus on performance though, which has to do with the next point:

WordPress’ full site editing project is not done yet. Anecdotally, more and more people are having a hard time deciding how to build their site on WordPress. Wix and Squarespace are simply way simpler tools to build a site. As they improve their SEO tooling, there’s less and less reason to switch over to WordPress.

The post inspired rampant speculation in the community, and the discussion has splintered off into different pockets across the web – various Twitter threads, Post Status Slack, and a post in the Advanced WP group on Facebook that has already received more than 100 comments.

It’s not realistic to expect any CMS to make gains every month, even if it has grown steadily in the past. WordPress is still far and away the market leader, but many see the new decline in market share as a symptom of a deeper problem. No one can definitively say why WordPress is losing market share but the community has a few prevailing theories.

Performance is one of the contributing factors that is easier to measure than many others. According to data from HTTP Archive, WordPress trails its closest competitors when it comes to percentage of sites with good Core Web Vitals scores. 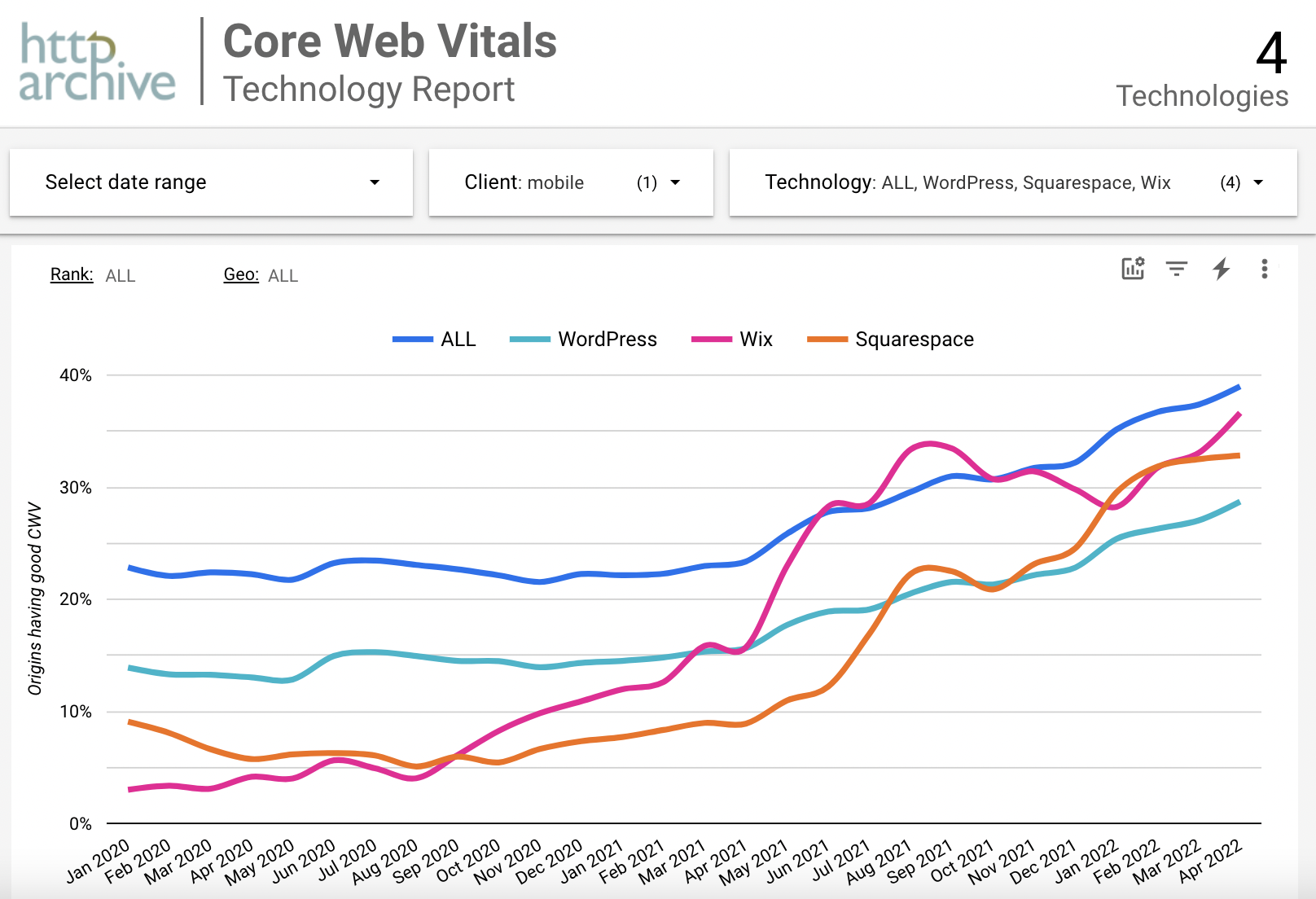 “I’m not excited to see the percentage drop, but it confirms even more that something needs to change,” Google-sponsored contributor Felix Arntz said. “It’s also worth adding that the growth rate of other CMSs like Wix or Shopify has already long surpassed WordPress even before this. My session at WordCamp Europe is precisely going to focus on this topic.

“All this is why we started the WordPress performance team a couple months back, we need to make more solid performance decisions out of the box for WordPress. Let’s work together so that we can turn this around over the next few years.”

Many saw the news of WordPress’ declining market share as an opportunity to weigh in on their pet grievances about WordPress and the Gutenberg project in general, but there are some legitimate concerns about the condition of the software when it’s rolled out to millions of users.

“Full site editing and its deployment into core before it has really been ready isn’t doing us any favors for newcomers to WordPress,” WordPress developer Daniel Schutzsmith said. “It throws them off and scares them because it feels broken in many aspects.”

WordPress’ increasing complexity is another strong factor many participants cited as a possible influence, particularly those who build websites for clients. The software has become more sophisticated, enabling users to do more things than ever before, but it’s not getting easier to use.

“I don’t do much WP dev anymore, but after needing multiple articles and a YouTube tutorial for me to understand the new Navigation block, I knew WP was in serious trouble,” developer Alexis Rae said. “That 5.9 pushed out full site editing as the only option (that I can tell) while it’s a beta is insane.”

Multiple participants in the discussions on Facebook and Twitter said they have recently been building some of their clients’ sites with other technologies to make it easier for their clients to manage their websites.

… for the last few years, this hasn’t been our experience and eyes are wondering towards other solutions. We’ve already delivered sites on Webflow, and even a couple on Squarespace. That would have been unthinkable two years ago.

“From working with clients I notice that the quality of the admin interface is really becoming an issue that turns people off from WordPress,” Florian Fermin said. “On the lower end, this drives people to go to Squarespace and Wix instead. On the high end, I have now migrated multiple sites away from WordPress to CraftCMS and clients have been delighted with the clean interface it provides, and they’re confident to make small changes themselves, allowing me to put my energy in more exciting stuff.”

WordPress gained popularity early on by being the best free software available for blogging, and then later for its flexibility as a CMS. The transition into a nocode style site builder has been difficult with extensive periods of growing pains. As most of the energy and resources put into core seem to go towards Gutenberg, other older aspects of the software have gone neglected.

“WordPress has really developed into jack of all trades and master of none,” Fermin said. “In my experience, this has meant in the last years that when I have to recommend a CMS for the use case of a client, more and more often the answer has been something else and not WordPress.”

WordPress used to be one of the strongest solutions on the market for building small, simple sites but competitors are making it faster and easier to launch these kinds of sites. Meanwhile, WordPress themes are going through a rocky transition towards better accommodating full-site editing features.

“For my clients (mostly government), FSE is not the way to go,” WordPress developer Roy Tanck said. “I spend a lot of my time disabling new features now. If WP continues to become a ‘site builder,’ traditional CMS clients will likely start to look elsewhere.”

In his conclusion, Joost de Valk contends that the full-site editing project is taking far too long.

“That’s causing the rest of the platform to lag behind current web trends,” he said. “Without a drastic change in this approach I think WordPress will continue to lose market share for the next few years.”

Although some may agree that the project is taking a long time to reach a polished state, much of the feedback on social media indicates that developers do not find FSE user friendly enough for their clients.

“WordPress is just too complicated for the majority to use effectively,” development agency owner Jon Brown said.

“WordPress ought to be way more opinionated on accessibility and performance such that users should not even have to think about them. The problem with the current WP philosophy it is ‘let’s do as little as possible to leave options for the user or make the user rely on plugins’… No! Stop that. Do more by default and then give the user the option to override that if/when necessary.”

Brown said this applies to core WordPress but is most evident in WooCommerce, where, after ten years, “you still need 25 add-ons just to get a basic store up and running.”

“This is why Shopify is devouring e-commerce market share,” he said.

“And simple personal sites, way easier to setup a five-page site on Squarespace or Wix for laypeople than it is to navigate WordPress.

Is WordPress losing touch with every day users? After two years of drastically reduced WordCamps and meetups, this is a genuine possibility. Many months before WordPress’ market share growth started leveling off, the strangely feverish push to return to in-person events during a pandemic seemed to betray an insecurity about what might happen to the community if required to continue on in isolation. WordPress usage numbers could be impacted by missing out on some of the grassroots growth and momentum that in-person events often generate.

WordPress’ relationship with the common user seems strained at the moment. It is no longer considered one of the easiest ways to get a website off the ground. Those who are eager to see WordPress succeed and grow can likely agree at almost any point in time that WordPress is not yet easy enough to use. A veritable army of Gutenberg contributors are working day and night to make full-site editing possible, but the project cannot afford to shelve usability concerns for too much longer, or it risks becoming software that is only used by an elite, knowledgeable few.